Sometimes gentrification is an adventurous entrepreneur opening a ramen noodle shop in a “gritty” neighborhood, a property management company purchasing working class homes and converting them to rentals for college students, or a hipster business opening a new cafe. It’s often a slow process that ebbs and flows, usually playing out over the course of several years.

In other cases, it seems like a blindingly fast process with almost immediate consequences. Entire blocks of property are purchased, existing businesses and homes are demolished, and the transformation takes on an almost totalizing feel. Multiple streets and communities are changed seemingly overnight in a process that tears apart the social bonds and connections that had developed in them over time

In Grand Rapids, this is happening in the Belknap Neighborhood, a traditionally working-class area north of I-96 and roughly bounded by Fairview Avenue NE overlooking the Grand River to the west, College Avenue NE to the east, and Coldbrook Street to the north. In recent months, the process has become increasingly visible, with entire blocks of homes demolished and plans announced for additional demolitions. The neighborhood mirrors a construction site.

While city leaders, developers, and urbanites are practically salivating at the sound of each blow of the wrecking ball, the development is displacing large numbers of people and dramatically changing the culture of the neighborhood. In the rare cases when this is talked about, it’s usually portrayed as a good thing, yet we can be sure that there are many untold stories of displacement, frustration, anger, and loss. For example, one twenty-year resident of the neighborhood told WOOD TV:

“This sucks … They took my neighborhood away. They took friends away, all to quote ‘better themselves’ or ‘better the community.’ You can’t better friendship that you’ve lost. …This whole thing is just hard to take.”

They went on to say:

“I am definitely stressed due to this, and yeah, I got pills for it, but pills don’t mend a broken heart and this breaks my heart because like I said, the people that I knew around here, they either were bought out or they died, and once they died, they’ve got to be rolling over in their grave, they didn’t want to see anything like this.”

What follows is a series of before and after photos documenting what is happening in the neighborhood. 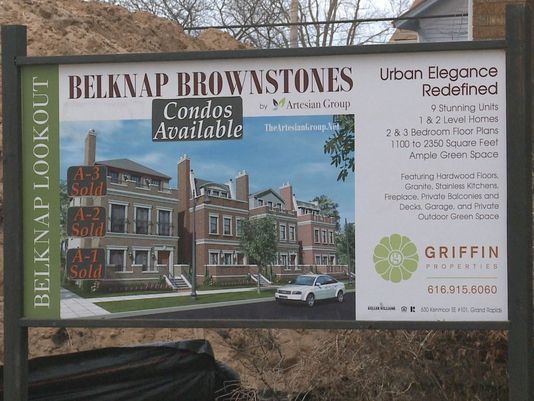 One of the first projects in the Belknap Neighborhood was the Belknap Brownstones. The Artesian Group demolished two homes to build them. It’s a project that is typical of the class transformation that is and will be happening to the neighborhood.

The $300,000 dollar condos were profiled in Mlive’s “High End Homes Series” with reporter Jim Harger describing the brownstones and the neighborhood with an offensive fairytale analogy:

“Belknap Lookout has long been the Cinderella of Grand Rapids neighborhoods – waiting to shed its ash bucket image and become the belle of the ball as the neighborhood of choice for medical professionals working across the freeway on the Medical Mile.

Despite its lofty locale overlooking downtown and history as one of the city’s oldest neighborhoods, Belknap Lookout has struggled to overcome its image as an enclave of working class rental houses.

But with several new housing projects on the drawing boards and Grand Valley State University spending millions to buy up old houses for future development, Belknap Lookout’s enchanted future may soon be here. ”

Jim Harger’s contempt for the neighborhood’s existing residents is unmatched, with the exception of the developers, the Artesian Group. In 2008, the wife of Artesian Group developer Angel Gonzalez told Mlive that they wanted to “take out the trash” by purchasing “filthy and disgusting homes,” claiming that, “When you take your kids to Coit Park and you walk over dirty diapers, used condoms and 40 ouncers … you become proactive and want to see change for your kids.”

This attitude – while perhaps particularly crass – is on the same plane as that of all developers in the area, whose plans treat existing residents and homes as obstacles to be overcome.

Another project that has received considerable attention is “The Gateway at Belknap”. It’s a project that demolished 14 homes and is replacing them with 88 market-rate apartments, a restaurant, and retail space.

Developer Orion Construction has been quoted in the media stating that it “understands the importance of preserving the culture, character and integrity of a neighborhood,” yet it’s hard to believe this is the case when the project demolished an entire block.

A home before demolition: 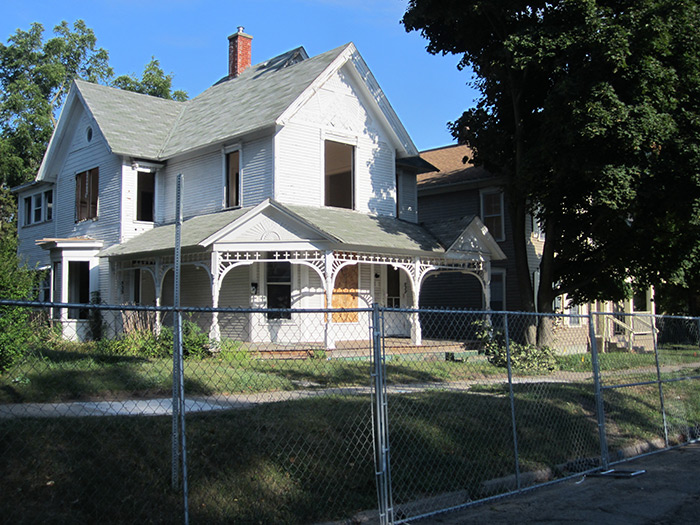 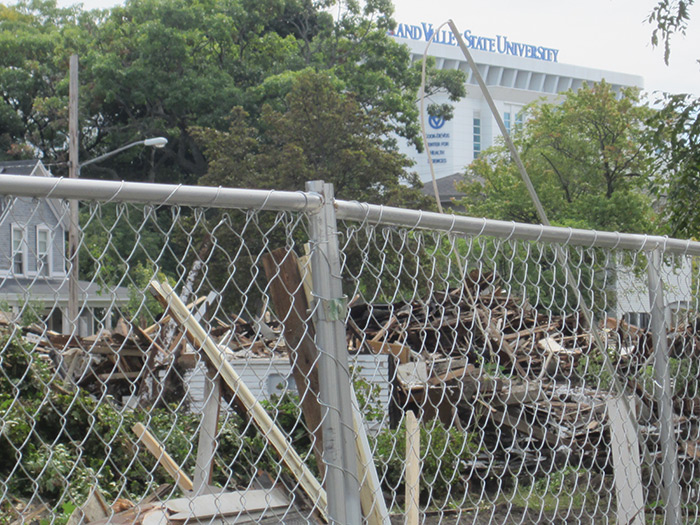 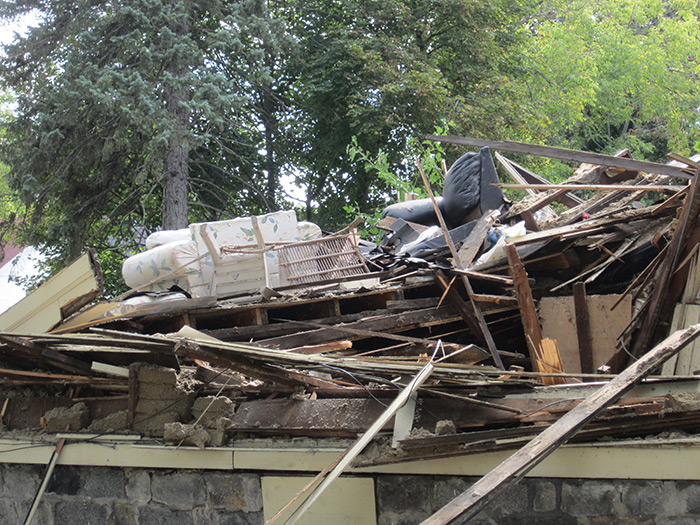 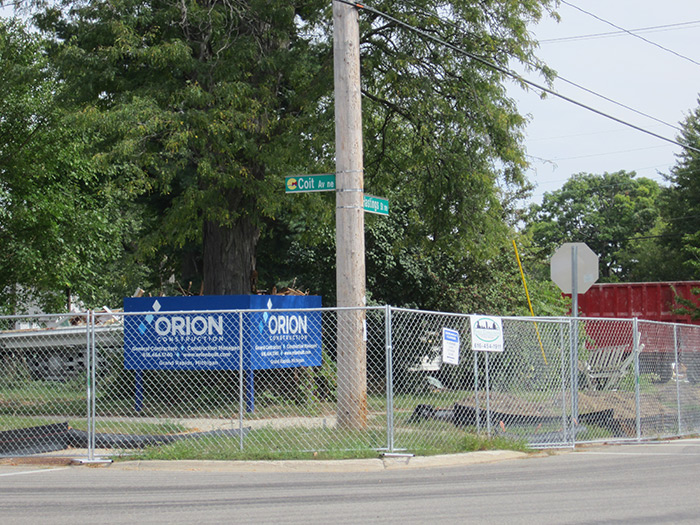 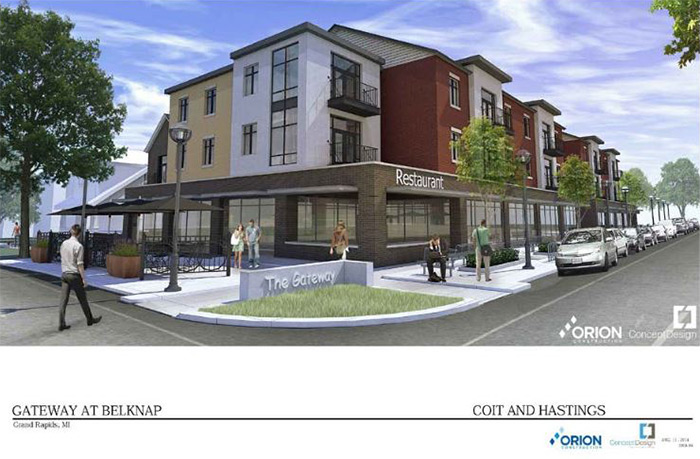 An earlier large-scale demolition took place in the neighborhood back in 2014, when developers demolished 12 homes along Clancy Avenue between Trowbridge and Fairbanks Street. The project – which has been stalled while the demolished block remains an overgrown field – will consist of three apartment buildings and five rowhouses. The apartments will be market-rate.

This photo from Google Maps shows what the street looked like in 2007: 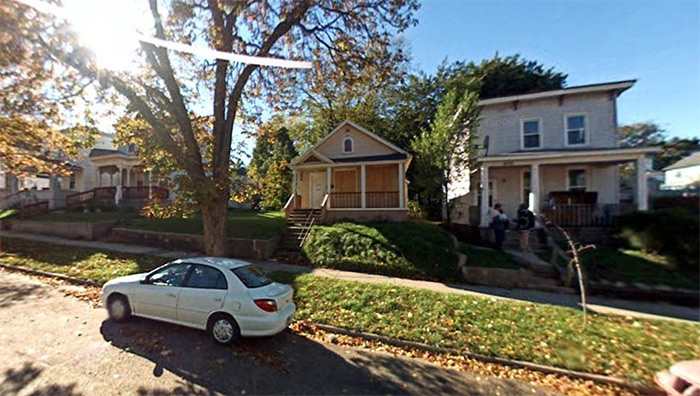 After the homes were demolished, the street has sat empty: 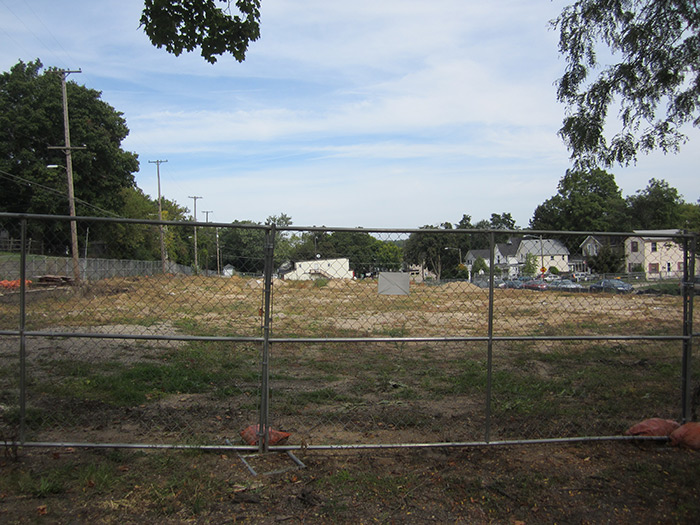 The final project is projected to look like this: 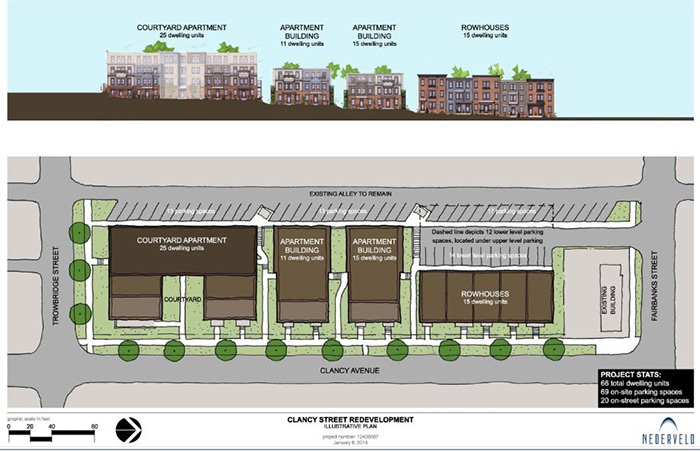 An entity that looms large in the Belknap neighborhood is Grand Valley State University (GVSU). Like the expansion of Butterworth Hospital/Spectrum Health, GVSU’s expansion along Michigan Street has been fueling development in the neighborhood.

This process has intensified dramatically in recent years, with GVSU acquiring 83 homes for $18.9 million. Some neighborhood residents have been critical of the project, saying that GVSU has not been forthcoming with its plans. Construction is supposed to begin in 2016 with the building being between 70,000 and 80,000 square feet.

As investors and landlords buy up properties in the neighborhood, there have been several other projects announced. One is an Artesian Group project that would replace homes on the 600 block of Coit Avenue. Tentatively called “Coit Square Condos, Cottages, and Town Homes”, units like the following would replace the currently standing homes: 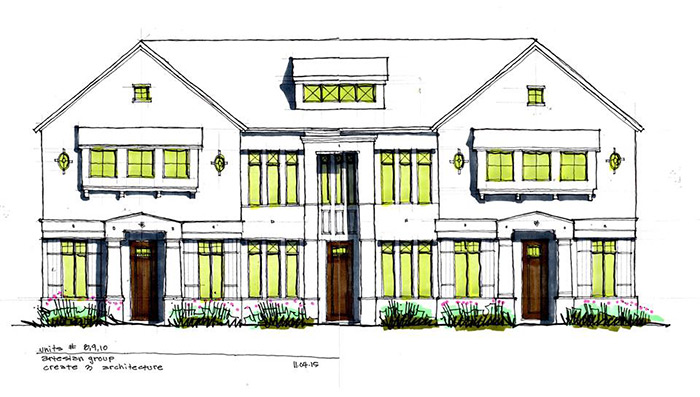 In 2008, another project that was built – albeit somewhat atypical – was the Newberry Place Cohousing Community. A condo was listed for $250,000 in 2014. Newberry Place has also been involved in the demolition of homes in the neighborhood. 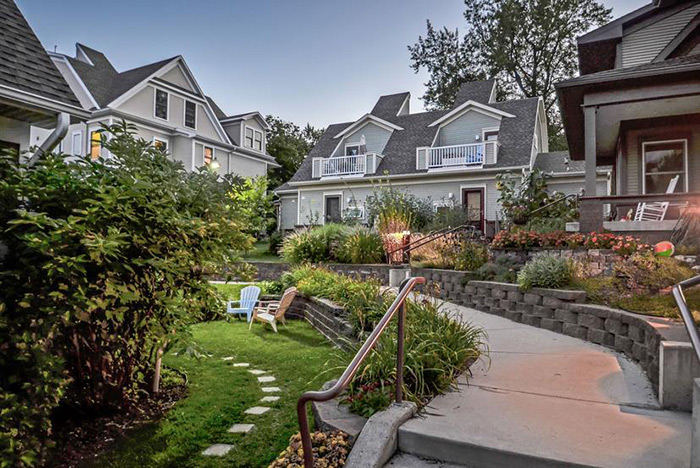 In In the Belknap neighborhood, gentrification has a decidedly different feel than in other neighborhoods of Grand Rapids. With the hospitals, Grand Valley State University, and downtown looming to the south, to walk through the neighborhood is to experience a foreboding sense of impending change. While developers, city leaders, and the media largely downplay or ignore what is happening, the destruction of entire blocks of homes and their planned replacement with rentals and developments aimed at a new class of residents make this an extremely clear example of gentrification.

Along with houses being physically demolished to make way for shiny new structures, homes are being destroyed as people are forced to move, with years of memories buried in rubble and ground into dust. While some may talk about “willing sellers” and the fact that the owners of these homes were paid – in some cases quite well – it’s important to remember that most of those selling houses were landlords and property owners, not those who actually lived there. In a gentrifying neighborhood, existing residents are often manipulated and shuffled around with little regard for their lives and are seen simply as anonymous bodies or numbers on a spreadsheet, useful only in terms of the maximum rent they can afford to pay and easily replaceable – by the block if necessary.