The near Westside in Grand Rapids is currently undergoing a process of intensive gentrification. Several new apartment projects are either in the process of being built or have been proposed, all of which introduce “market-rate” rents dramatically higher than the costs traditionally associated with the area. Additionally, restaurants, breweries, and boutique clothing stores have either opened or opening soon. Again, they introduce price points that have not traditionally been seen in the neighborhood. It’s a perfect example of gentrification defined as “the production of space for progressively more affluent users” (Hackworth, 2002).

At the forefront of these efforts are two new projects designated as “gateways” to the Westside: The Fulton Place development at Lexington and Fulton and the “New Holland” project on the corner of Bridge and Front. In both cases, the developments will introduce a mix of new housing, residents, and businesses into their respective neighborhoods, many of whom will have lifestyles and income levels dramatically different than those who have lived in the predominately working-class area. 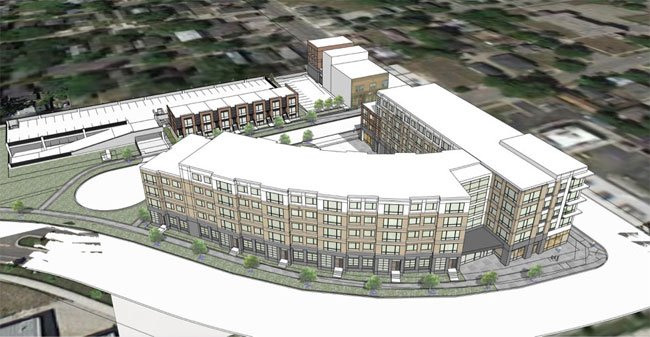 In advance of the May 5 groundbreaking for the Fulton Place development, there has been a lot of media coverage of the project. It’s been interesting—although not at all surprising—to note how the coverage has repeated the myths of gentrification, or “re-development” in Grand Rapids. With the exception of one story on WZZM 13 that placed the development in the context of rising rents on the Westside, the rest of the news coverage largely portrayed the project as a positive for the neighborhood and the city (see WOOD TV, Grand Rapids Press, and the Grand Rapids Business Journal).

One of the major myths of gentrification in Grand Rapids is that there is no displacement, it’s a mantra that’s repeated over and over: development is happening on vacant land, so there can’t be gentrification. This of course ignores the fact that gentrification scholars have long recognized that “displacement” doesn’t exclusively mean physical displacement and that displacement can happen over time as the culture and composition of the neighborhood changes. Gentrification is a concept that captures the ways in which most “redevelopment” projects involve a shift from one class to the other, regardless of whether or not they involve direct displacement or are built on vacant land. Jason Hackworth (2002) captures this well writing:

“…in light of several decades of research and debate that shows that the concept is usefully applied to non-residential urban change and that there is frequently a substantial time lag between when the subordinate class group gives way to more affluent users. That is, the displacement or replacement is often neither direct nor immediate, but the process remains ‘gentrification’ because the space is being transformed for more affluent users.”

Going along with the myth that construction on vacant land can’t be gentrification is the claim that gentrification in Grand Rapids simply doesn’t involve displacement. An example of this claim is found in a recent Grand Rapids Magazine article (“Big Shift: The Booming Demand for Downtown Housing”, March 2015) when they report that Grand Rapids’ city planner Suzanne Schulz told the magazine that “The city isn’t removing single-family housing; new construction on multi-family housing is happening where it doesn’t exist now.” 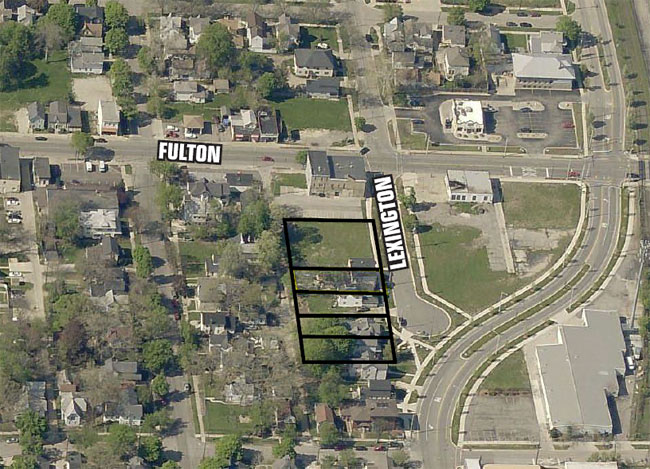 The Fulton Place development shows that this is not the case. Aside from the transformation that introducing so-called “market-rate” housing to the neighborhood will have, the development is demolishing four homes on Lexington Avenue SW and replacing them with townhomes. This fact was apparently lost on the media, with none of the stories reporting on this. It was either ignored outright, or in the case of WZZM 13, the station claimed that the development “…isn’t eliminating any housing on the Westside” and allowing Rockford Construction a platform to declare that they are “developing on primarily vacant buildings or vacant land.”

However, the development involved the purchase of four homes on Lexington Avenue (21, 29, 33, and 39 Lexington Avenue SW) all of which were occupied and were demolished (see video on Youtube). According to minutes from the Planning Commission’s January 8, 2015, meeting:

“Bradley Heartwell, Rockford Development Group, related that when they bought the subject houses one of them was owner occupied and he was happy to sell his house and has closed on another. Two of the homes were illegally occupied by renters, which they didn’t realize until after they closed on the property. The building closest to Fulton had four tenants and a number of them were looking for other housing and Rockford was able to assist them with finding other housing. All of the houses are currently vacant and in bad repair.”

This is a classic example of gentrification. The existing owners sell the homes for substantially more than what they are worth (the homes sold for between $155,000 and $250,000 according to property sale records), existing residents are displaced (in two cases, even being associated with illegality), and the houses are declared obsolete as they are not consistent with the “new opportunities for housing” are being built on the Westside. Instead, they are demolished and will be replaced by townhomes aimed at a decidedly more upscale renter. We can be quite sure that the displaced residents will not be given the opportunity to live in the new townhomes at the prices they were previously paying.

While news stories characterized the housing as being “for students,” it’s market-rate housing project that according Rockford Construction’s comments at the Planning Commission meeting, “isn’t designed as a traditional student housing project; it is designed as market rate housing.” They were clear about it their application to the Planning Commission and at the meeting to discuss the project, they compared it the 600 Douglas project on Seward, which they thought would attract students but instead has mainly attracted the coveted “young professional” demographic. Rents there range from around $1,000 for a studio to $2,100 for a two-bedroom unit.

Fulton Place exposes the myths of redevelopment in Grand Rapids. It highlights that far from being the benevolent force that it’s often portrayed as, it comes with real consequences: displacement, demolition of existing homes, and the transformation of space for more affluent users. As Neil Smith, the noted gentrification scholar once wrote:

It is a word that we must begin to use, as it captures the class transformation that is happening on the Westside and in other neighborhoods of Grand Rapids.