Writing about every new development, restaurant, or boutique in Grand Rapids that is contributing to the gentrification of the city would be an onerous project. There are simply so many—from new yoga studios to multi-story residential developments—it would get redundant to highlight every example. It’s an exercise we’ll leave to the cheerleaders of development in Grand Rapids. Read with a critical lens, the loud chorus of excitement on “The Salon”, in the Business Journal, and on other such sites can also serve as a chronicle of what’s wrong with the current path.

However, every once in a while, there is a project that comes along that is particularly egregious or that can be used as an example of larger trends happening in the gentrification of Grand Rapids and consequently, needs exploration in more detail. One such project is the recently announced “Coit Square” in Grand Rapids’ Belknap neighborhood. Coit Square, if approved, will demolish 11 homes on the 600 block of Coit Ave NE and replace them with condos and townhomes. With the exception of one, the existing homes are rentals that are currently occupied. The developer either has purchased the homes or has an option to do so pending City approval. In their place, they would build condos ranging in price from the low-$200,000s to the mid-$300,000s.

This would be yet another entire block of homes demolished in the Belknap neighborhood. The demolition of whole blocks has been characteristic of development in the neighborhood. Projects such the Clancy Lofts, the Gateway, and Grand Valley State University’s (GVSU) new academic building are taking out entire stretches of housing. The developer behind Coit Square, the Artesian Group, is teaming up with Orion Construction on the project. Both have other projects in the neighborhood, with Orion Construction working on the Gateway project and the Artesian Group being a longtime landlord and investor in the area. 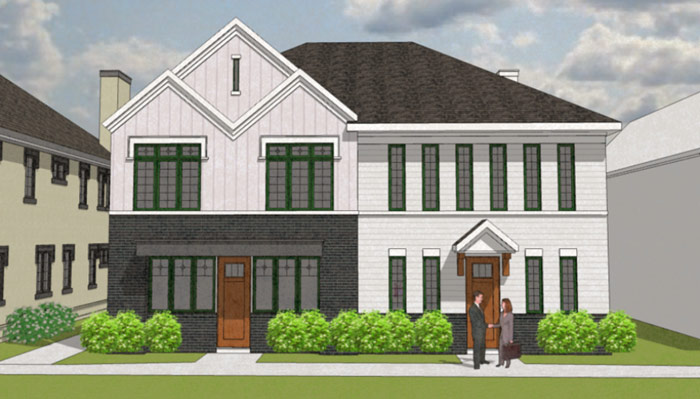 The Artesian Group has been buying up homes in the Belknap neighborhood since the mid-2000s (purchasing 38 properties in the neighborhood in total). The development company has taken an active role in the redevelopment of Belknap, participating in various organizations and entities at work in the neighborhood. This is not unusual as new interests often take an active role in the political organizations in gentrifying neighborhoods, but it’s something we have not discussed before. After encountering opposition to earlier plans, the Artesian Group facilitated the drafting of an Area Specific Plan (ASP) for the neighborhood. The resulting Belknap Area Specific Plan was produced. It had the backing of the Artesian Group and many of the primary participants in the process were other landlords and investors in the neighborhood (see the appendix summarizing the meeting in the ASP and a summary of the process presented to the City Commission). ASPs have been held up by the City as a solution to gentrification, yet in most cases they seem to provide the framework for it to occur.

Beyond the ASP, the Artesian Group’s founder, Angel Gonzalez, is on the board of the neighborhood association, Neighbors of Belknap Lookout. It’s worth noting that a letter from Neighbors of Belknap Lookout and adherence to the Area Specific Plan (ASP) were both touted by the Artesian Group when they presented the request for re-zoning the properties in question. According to minutes from the Planning Commission, at least one Commissioner appreciated the support the Artesian Group had garnered from the neighborhood association. As one would expect, the request to rezone the land and demolish the homes was approved unanimously by the Planning Commission (it still needs to go before the City Commission). 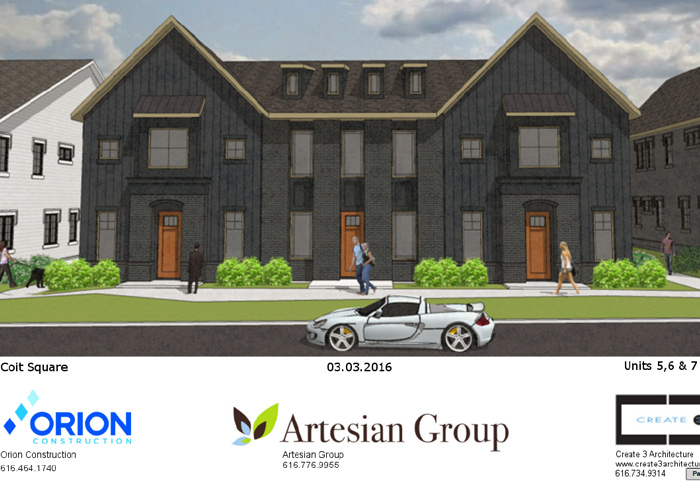 Rendering of Coit Square, complete with what appears to be a Porsche 918 parked outside.

The Coit Square project would replace existing and accessible rental homes with condos that would be out of reach for many of the current residents. This should come as no surprise, after all, the Artesian Group was also behind the “Belknap Brownstones” which were profiled in Mlive’s “High End Home Series”. Coit Square will usher in a similar class transformation, inviting new and wealthier residents while ultimately displacing the existing residents. Gonzalez’s wife, Tara, spoke before the Planning Commission in 2008 saying that her and her husband have “worked hard in changing the class of tenants in the area.” It’s the same meeting from which Mlive quoted this gem:

“When you take your kids to Coit Park and you walk over dirty diapers, used condoms and 40 ouncers … you become proactive and want to see change for your kids,” Gonzalez said.

That’s why the couple purchased former crack homes that were “filthy and disgusting” and worked hard to bring them up to code, she said. They also worked to get responsible renters who will take pride in the neighborhood and “take out the trash,” she said.

Their development projects have consistently been presented as if they were saving the neighborhood. Some of this has been couched in an anti-renter sentiment, with the Artesian Group saying that this brings much needed “homeowners” into the neighborhood. However, as Angel Gonzalez stated in a recent Mlive article, this isn’t about bring in homeowners in general, but rather a specific type – those “who are going to be active and want good stuff to happen in the neighborhood.” In the context of Belknap, this likely will mean wealthier residents who will appreciate the new amenities that have been proposed for the neighborhood. As is the case in so much of U.S. media and culture, working class people are criminalized and pathologized, while the behaviors of middle and upper middle class people are unquestioningly valorized. 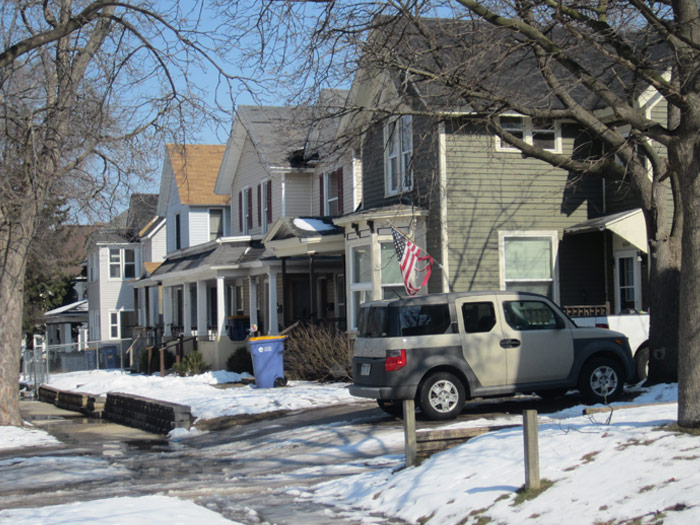 There has been at least some discussion of 2 of the 39 units being designated as “affordable” but it doesn’t seem to be a major component of the project. As presented to the Planning Commission, the discussion seemed speculative and there was no further information requested by the Planning Commission. There was of course no talk of the prospect of current residents moving into the new homes that would be built in place of their current residences, because after all, they are simply people to be shuffled around and cleared out as the neighborhood “improves.”

Finally, this latest project is yet another example of how good old fashioned gentrification – complete with demolition and displacement – does indeed happen in Grand Rapids. It isn’t a matter that is up for debate, it is something that is happening. Why is it then, that city leaders like Planning Director Suzanne Schulz, have been able to get away with saying things like “The City isn’t removing single-family housing; new construction on multi-family housing is happening where it doesn’t exist now,” when it’s clearly a lie (quoted in “Big Shift: The Booming Demand for Downtown Housing”, Grand Rapids Magazine, March 2015)? From other projects in Belknap, to the Fulton Place development on the westside, and the 33 Carlton project in Eastown, the demolition of existing homes is a regular feature of development in the city, and not an anomaly.

From the southeast side to others the westside, developers are constantly crafting visions for the gentrification of entire neighborhoods – and doing so without neighborhood involvement. By the time they come to the neighborhood, or indeed by the time many of those affected are able to figure out what is happening, the work has already been done and the neighborhood has already been bought. From there it’s just watching the slow and painful process of displacement, either directly or culturally, unfold – with the city’s rubber stamp.