Over the past few years, hardly a month has passed without an announcement of some new apartment building or development project in Grand Rapids. Each announcement is accompanied by a barrage of news articles, often portraying the development as inevitable. This coverage is colored by triumphalism, with the media clearly taking sides in favor of the developments. Depending on the particular project, there will be a story announcing the project, one outlining the history of the building, a story or several giving construction updates, and a story announcing open houses and/or leasing opportunities. The local news media functions as a hype machine, providing uncritical cheerleading and free advertising for developers.

In order to explore in more detail how this works, it is necessary to focus on both a specific project and a specific media outlet. For this article, we’ll focus on 616 Lofts on Monroe and the coverage of the project in The Grand Rapids Press / Mlive.com. This development is representative of many taking place in Grand Rapids. Located at 820 Monroe Ave NW, it is a conversion of an existing building into market rate apartments aimed primarily at young professionals. The loft-style apartments are available in configurations ranging from studios to two-bedroom apartments, with rents between $1,000 (studio) to $2,000 (two-bedroom) per month. 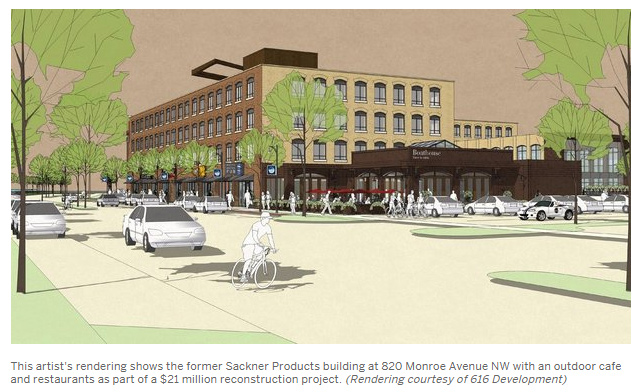 In January of 2014, The Grand Rapids Press published its first article on the project, titled “$21 million makeover will put loft apartments into former Sackner Products factory.” The article—like so many covering projects of this nature—was a simple announcement stating that 616 Development would be spending $21.8 million to construct 86 loft-style apartments. The article was essentially a press release for 616 Development, including language describing the company as “one of downtown’s most aggressive housing developers.”

In the fall of 2014, The Grand Rapids Press reported on the project again. The first article, “Downtown lofts project on North Monroe Avenue gets $1.3 million state loan participation”, announced that the project received a $1.3 million loan from the Michigan Community Revitalization Program before listing a number of other projects undertaken by 616 Lofts. A second article was published in November covering a media event staged by 616 Lofts. The article, “See the old North Monroe factory that will become 616 Development’s new apartment project” featured a gallery of pictures from the under construction building. The reporter who wrote the story, Jim Harger, referred to the tour as offering “…the public a first-hand look at the old posts and beams and the generations of paint that are being sandblasted in the 96-year-old factory”. However, the tour was less about offering the public a first look than it was about creating buzz for the apartments. The majority of the article focused on the amenities and the allure of downtown living and read like advertising copy. 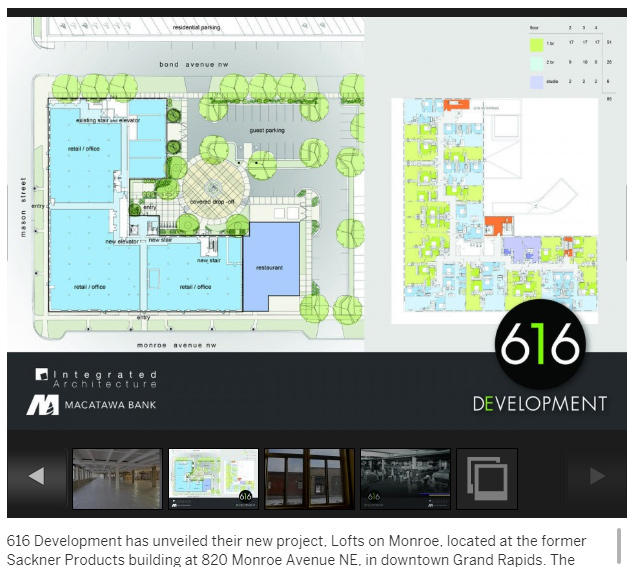 In June of 2015, an article (“Bistro Bella Vita owners building new restaurant in North Monroe district”) announced that a restaurant tenant had been found for the ground floor of the development. The story was short, but allowed the project to remain in the media and again gave developers a chance to talk up the development, with Monica Steimle of 616 Development stating, “With the community focus on increasing access to the Grand River as well as improving connectivity from Belknap to the Grand River, this development and restaurant will be an asset for the corridor.” 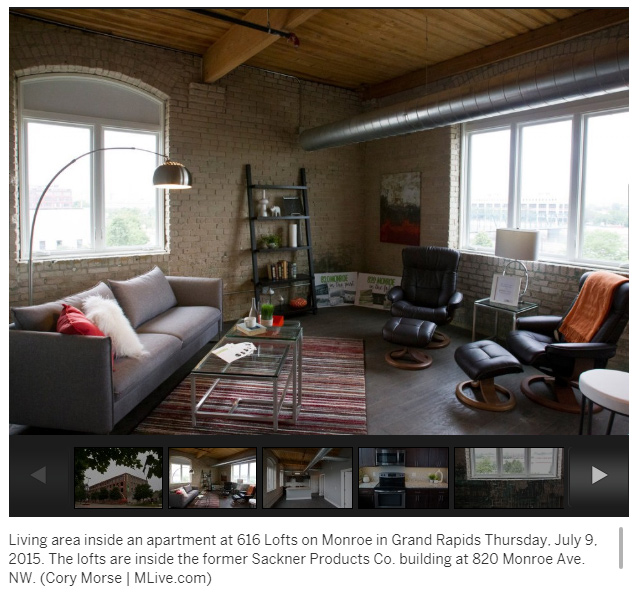 A month later, The Grand Rapids Press published another article (“New loft-style apartments on North Monroe are opening up”) giving an update on the status of construction. The article covered an open house organized by 616 Lofts to encourage people to pre-lease apartments. Once again, the Press article was essentially an advertisement for 616 Lofts on Monroe featuring numerous photos of sample units and a list of amenities. The article’s language read like advertising copy, stating:

Common areas will include a rooftop deck overlooking Canal Street Park and the Grand River and a community room.”

The article ended with a brief history of the building and the closing declaration that 616 Development is “one of downtown’s most active housing developers.” It read just like a press release.

In November, 616 Lofts on Monroe was once again the subject of an article in The Grand Rapids Press which covered the announcement that a brewery will also be part of the development. The article, “City Built Brewing Company to bring unusual beer, Puerto Rican food to Grand Rapids” announced that a brewery would be opening in May or June 2016. Again, it offered the opportunity to plug the apartments and the project as a whole, positioning it as a critical part of the revival of the neighborhood.

Looking at the coverage of the 616 Lofts on Monroe project in The Grand Rapids Press, there are a few immediate takeaways. First, these stories are entirely positive and draw heavily from what the developers tell them. Second, the stories are primarily advertisements. They function more as sales pitches than news stories. This is particularly true with the repeated updates covering staged media events and updates on leasing availability. Third, developments are presented as a given – public meetings are either not mentioned or approval by various City of Grand Rapids boards is presented as a mere formality. Finally, this coverage of development is easy for news companies to produce. Heavily relying on copy from press releases, attending staged media events, and using architectural renderings takes the difficulty out of news reporting. Moreover, the pattern of repeated coverage – announcement, update, history, leasing update – generates more online ad revenue with little investment. 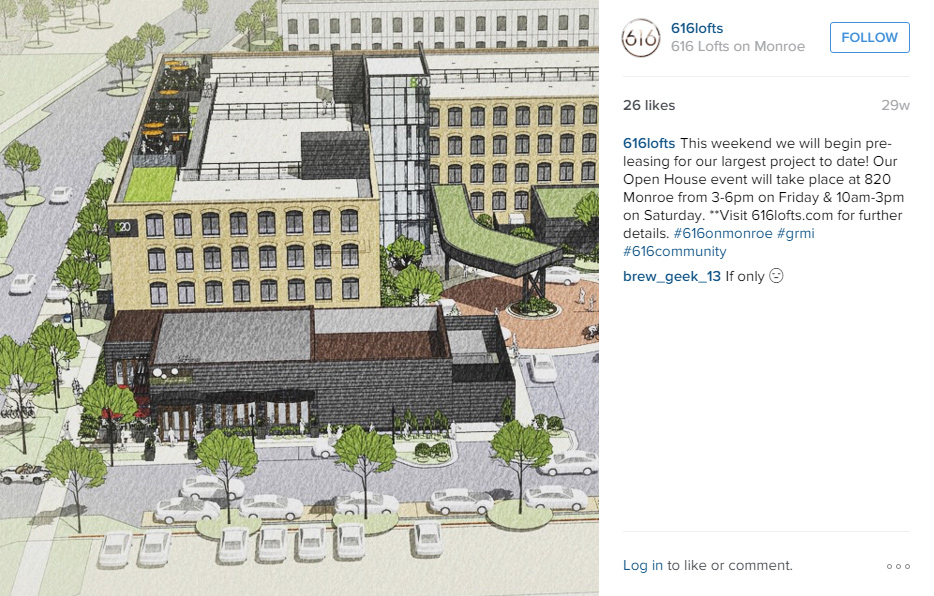 The news media not only offers space to developers to “sell” their product (in the form of apartments), but they also play a critical role in “selling” development as a whole. News coverage almost always portrays developments as a “public good”, creating a sense of “community” pride in development. This is done by way of stories that speak of returning a building to “its former glory” or a project transforming “a long vacant area.” They are selling the idea that in some way, all residents of the city benefit from the project. The truth is likely more complicated, but when the news media relies only on official sources – such as the developers or city officials – one gets the sense that all of this development is “good”. It would be considerably more difficult – and a lot more interesting – if reporters talked to those affected or potentially affected by the developments. The popular narrative would likely change if reporters asked the opinion of folks living nearby, those who are losing their homes due to development (as is happening around the city), or non-profit agencies.

But of course, that is not how things work. The dominant media in the United States (including here in Grand Rapids) exists to support the status quo. Its job is arguably to foster allegiance to the system and encourage people to be content with the way things are. As such, it makes sense that the news media plays an important role in promoting the ongoing gentrification of Grand Rapids. Scholars have noted that the media plays a critical role in promoting development. Writing in “The City as a Growth Machine”, academics John R. Logan and Harvey L. Molotch state:

“One local business takes a broad responsibility for general growth machine goals—the metropolitan newspaper. Most newspapers (small, suburban papers are occasionally an exception) profit primarily from increasing their circulation and therefore have a direct interest in growth.”

As a result, there will rarely be critical coverage—because more apartments means more residents, more subscribers, and more profit. The news media functions as a mouthpiece for developers, uncritically covering developments and ignoring concerns regarding gentrification and displacement. This is seen over and over and the pattern repeats – regardless of the particular development being discussed.